Defending champions Barcelona were hosting the team from Capital- Real Madrid en route to their second consecutive Cup finals at Les Corts. As it has always been, things were not easy between Barcelona and Real Madrid, as both the sides were on top of their game during the 40’s. Especially Barcelona, who were rather seen as a Catalan embelm- Catalonia’s voice against the totalitarian regime.

The match ended 3-0, Barcelona beating Real Madrid at Les Corts to take an advantage before the second leg at Chamartin. The significant thing, however, was not the scoreline, but the way the match unfolded. Madrid complained that the referee, José Fombona Fernández, had allowed Barcelona’s first goal to stand despite it being preceded by a foul, criticized the penalty he gave for their second, and insisted that the third had been offside.

The tension, however, was not done at the pitch and Madrid. The Les Corts crowd was not pleased either. Les Corts whistled at the referee throughout the match, whistled at the protesting Madrid players and more importantly, took a chance to whistled at ‘Franco’s Team’.

What followed for the Blaugranas was even worse. Barcelona were fined 2500 pestas and above all, had to travel to Madrid’s own backyard to face the second leg after a week.

Madrid was all set and ready to welcome Barcelona at Chamartin. Teus, a journalist started the hostility, writing a match review that served as a catalyst to enrage the feeling of revenge amongst Madridistas. In that published review, Teus admitted ‘Madrid were cheated at Catalonia and it should be Madrid’s turn to return the favor’. He added, ‘Les Corts scared Fombona and took a chance to whistle at everything Madird stands for. If Madrid are to win, Chamartin should react in the same way.’

This was when the ambush was really set up for traveling Barcelona team. Tickets were sold cheap, and every ticket came with a tin whistle. Barcelona fans were banned from traveling to Madrid. Chamartin was ready to welcome the Blaugrana, so was the “Franco’s Team”.

Just as the Barcelona bus left the hotel for Chamartin, stones started coming in for the traveling side. Everyone inside the bus knew it wasn’t going to be easy for Barcelona. The only question was- How hard is it going to be?

Barcelona’s box was full of coins before the match had even started. Lluis Miró, the keeper, rarely appraoched his own line throughout the match. When he would, he’d get hit by stones and was scared to death. 30 minutes in the match and there were all sorts of things flying around- bottles, coins, stones- all aimed at Barcelona players and staffs. By then, Barcelona were already 2-0 down.

Barcelona players and staffs, inside the dressing room, considered walking off the match inorder to ‘save their lives’. That was when, a colonel approached the Barcelona dressing room and uttered, “Go back and lose, otherwise you all are going to jail.” That was it. Under Franco’s regime, getting behind the bars was the most cruel thing that could happen. Prisons were very diffcult and noone would know if the person had been dead or alive. As a consequence, Barcelona had to go on the pitch for the second half. The match ended 11-1, Barcelona players lucky to have escaped death. 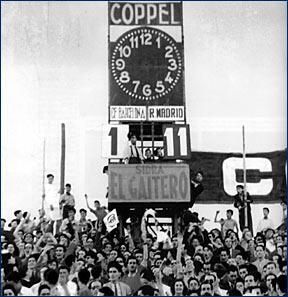 The consequence of an exaggerated press campaign resulted in the biggest victory of Real Madrid’s history. Barcelona were stripped off their chances of expressing the city’s desire through football. Till this date, Real Madrid deny being the ‘Franco’s team’, but this very incident, made it obvious- Barcelona vs. Real Madrid will always be a ‘more than a club vs. just a club’ fixture.

[Based on Sid Lowe’s Fear and Loathing in LaLiga: Real Madrid vs. Barcelona]